Free PBX is a web-based open-source graphical user interface that manages Asterisk, a voice over IP and telephony server. Free PBX offers organizations an all-in-one IP PBX that is freely available to download and install with all the basic elements needed to build a phone system. Sponsored and developed by Sangoma and a robust global community, Free PBX is the most widely-used open source IP PBX in the world which gives users the tools to build a phone system tailored to their needs. An intuitive graphical user interface makes taking advantage of the power of Asterisk much easier to deploy and use.

Sangoma offers IP phones from the beginner to the professional level as well as a new DECT solution (Combo: Basis + Handset). Whether small, medium or large business – a suitable phone is there for everyone. Your Sangoma IP phone works best with a Sangoma PBX.

Sangoma S-Series IP phones are the only IP phones on the market specifically designed to work with Free PBX phone systems.

With zero-touch provisioning, Sangoma S-Series Phones do not offer any complication to the user and can be quickly and used. Wherever you are in the world, just plug them into an internet connection and the redirection service will automatically pair and configure the phone with the phone system. This allows end users as well as remote users to setup their own phones within seconds and hence makes the job of IT administrator hassle-free.

When S-Series Phones are paired with Free PBX, the End-Point Manager module is automatically activated, for the life of your phone system. 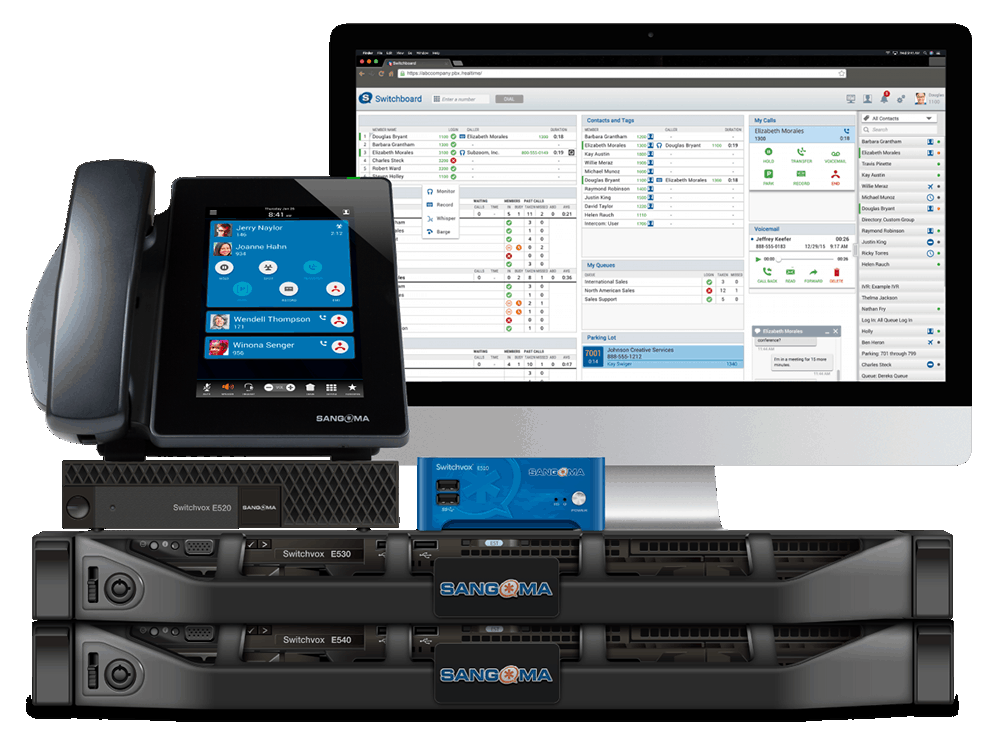 S-Series IP phones are designed for productivity and collaboration. The built-in Phone-Apps, a bundle of advanced applications, convert all your advanced phone system features into easy-to-use visual applications, which you control directly from the phone’s display.

S-Series Phones can be customized with user friendly applications which improves efficiency and ultimately productivity.

Each S-Series phone is factory imaged with a unique serial key. This high level of security with prevents hackers from contacting the redirection server, pretending to be an S-Series phone.

Users from remote locations can securely connect to the corporate phone system with built-in VPN.

No need to search for a wall socket for power, S-Series can be powered directly from the internet cable connection.

S-Series phones support TLS/SRTP encryption, so hackers cannot try and intercept the call path or listen in to the call.

Sangoma Free PBX Phone System 40 is deal fit for businesses looking to get more from a PBX. With millions of deployments throughout the world, Free PBX is relied upon daily by everyone from enterprises to start-ups. Leveraging the power of Free PBX has enabled businesses to grow while keeping communication expenses minimal.

The Free PBX Sangoma 40 appliance is recommended for up to 40 extensions and 30 concurrent calls. The Free PBX Distro has made deploying, configuring and using a PBX system easier than ever.

The Free PBX Appliance Phone System from Free PBX and Sangoma is an all-purpose, high-performance PBX solution that can accommodate any size business. This PBX has been designed specifically for users who desire optimal performance and a dependable PBX solution. Pre-loaded with Free PBX Distro, this product features a 1-year warranty and is an ideal fit for business that are seeking more from their current PBX offering.